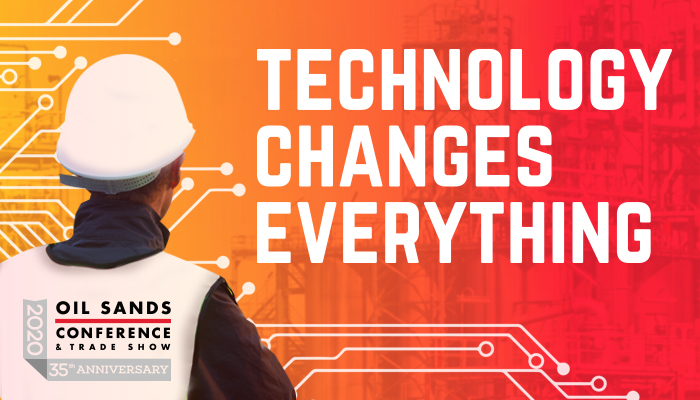 Alberta’s energy sector has seen many ups and downs over the past few decades with change always being a significant element of the industry.

And industry icon Eric Newell, former CEO of Syncrude, has been there every step of the way to witness the evolution of the oilsands as they became an integral part of the province’s economy – the bread and butter so to speak for its prosperity.

When Newell originally came to Fort McMurray on loan from Imperial Oil in Toronto on August 1, 1986, it was a very bleak time for the oilsands. Some people even thought the industry would not survive.

“What is noteworthy about that time, was that it was right after crude oil had fallen below $10 a barrel. There was a lot of concern that these oil prices were going to stay low for a long time, and the oilsands just weren’t going to be economically viable,” says Newell. “The concern across the community was palpable.”

For the past 35 years, the annual Oil Sands Conference & Trade Show has documented and followed the sector through its prosperous times and its depths of despair – keeping the industry informed of news, latest developments, future potential and technological change. The Show, which this year takes place September 16 – 17 in Fort McMurray, is the premier event specifically developed for Alberta’s oil sands sector. This event features a large-scale exhibition, two-day business conference, two-days of technical presentations as well as a number of high-impact networking functions.

It’s the place for oil sands operators and their contractors to seek solutions and innovations to reduce costs and maximize existing equipment and facilities. The show and conference focuses on promoting the latest technologies, maintenance, shutdowns/turnarounds, mining, upgrading, health and safety and environment strategies.

Newell says the world was changing at the time he moved to Fort McMurray and it was a critical period for the oil sands for the industry to get its cost structure under control and to improve the safety and operations reliability. In the early 1990s, Alberta Chamber of Resources created a National Oil Sands Task Force to get people interested again because everyone had forgotten about the oil sands.

Newell says he used to joke to “anyone who would listen” that he was the CEO of the best kept secret in Canada.

“In 1996, we had zero dollars going into capital projects in the oil sands. The industry announced plans to start $6 billion worth of projects. We thought this was a phenomenal number, but of course as things transpired, once you get the conditions right, you won’t look very visionary because you will blow right past all your targets. The industry has now spent well over $200 billion,” says Newell.

He was a key player in the industry’s rebound by first communicating the vast potential of the oil sands then bringing that potential to market and setting the stage – the foundation – for the industry’s enormous growth in the following years.

“What ended up happening was that once we got the conditions right,

we tripled production. But it only took us eight years, not 25. We didn’t spend $21 to $25 billion. We spent over $200 billion on oil sands expansion projects. And production is now five or six times as much,” he says. “We were way over what was estimated would go to government, taxes and royalties, and also the number of jobs we created.”

“The key technology that enabled it to develop the way it has, is embodied in the Syncrude Aurora mine project.  It allows for the remote satellite mine to feed the central upgrader 35 kilometres to the South,” adds Newell. “It’s one of those really interesting examples of a Stephen Covey (author) principle of begin with the end in mind.”

The key enabling technology was hydro transport which was invented at Syncrude research.

“Up until then, the extraction process was still based on the hot water process developed by Karl Clark way back in 1925. This process required the extraction at about 80 degrees centigrade. That drives a lot of the design.  When the sand needs to be heated up to that level, it dictates the need for tight heat integration with the upgrader.” From that standpoint, the energy requirements means that the mine must be located close to the upgrader, says Newell.

“Syncrude researchers determined that by creating an oil sands slurry and pumping it over a certain distance, enough mechanical energy was introduced to allow the extraction to occur at 35 degrees (not 80 degrees) Centigrade.  This reduced the amount of energy required to produce a barrel of bitumen by 40% which is not only economical but also reduces greenhouse gas emissions significantly.”

“Over the years, the industry kept moving in the direction of new technologies, For example, we developed things like the world’s largest hydraulic and electrical trucks and shovels,” said Newell.

“We’re now at a stage where we’ve got so many improvements and new technologies coming along, that the oil from the oil sands is almost as good as the best of the conventional light oil. But you’ve still got people out there, and they get away with it, falsely stating it’s three to four times the greenhouse gas of conventional oil. Quebec calls our oil dirty. It isn’t dirty,” says Newell.

“Yes, we’ve got environmental challenges, but we probably have bigger ones in just getting people to deal with the truth and putting it in perspective. It is a big issue and we do take it seriously. I always want to be very clear on that. We take our environmental responsibility very seriously.”

“The bottom line here is, that the big global issue is about reducing greenhouse gases, and that’s what they mean by making a clean fossil fuel. And if we’re successful in these technologies the oil from the oil sands will be the cleanest – not the dirtiest – source of fossil fuel in this planet,” says Newell.

“We’re not dirty oil anymore. We’re going to keep working. We are going to keep reducing our environmental impact. We’re making very good progress . . . These technology developments don’t occur overnight. They take 10, 20 years. And we have the path forward laid out.”

But because of some bad government energy policies in recent years, we’ve scared most of the foreign capital out of the oil sands. That is a big hurdle and there is a need to attract the foreign investment back into the oil sands.

The key is continued demand around the world for what Alberta possesses. The other issue has been pipeline capacity to access markets. But Newell remains optimistic that progress will be made there as well as in foreign investment.

“The demand for energy is so huge. We are sitting on this huge amount of energy that the planet is going to demand so much of. We’ve got a moral responsibility to develop that resource in a sustainable fashion . . . There’s a tremendous can-do attitude in the oil sands.

“The wonderful thing we’ve got going for us is we know the oil is there. So, our destiny is in our own hands. We have to find ways to develop that in an economical and sustainable fashion. And if we do that, we’ll secure Canada’s energy future for decades to come.”